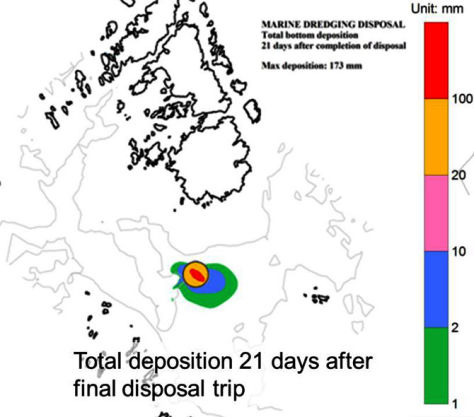 ASL has developed and continues to refine the high-resolution 3D Coastal Circulation Model (COCIRM) used in support of determining the transport and fate of sediments released from proposed industrial developments, such as dredging for ports, installation of marine pipelines and disposal at sea (DAS) of dredged materials in designated ocean disposal sites.

ASL's model includes a modular version (COCIRM-SED) that allows detailed modelling at very high spatial resolution in both the horizontal (< 100m) and the vertical layers (from a few to tens of meters in size) of sediment transport and fate due to 3D ocean currents and episodes of waves. Figure 1 shows an example of ASL-COCIRM-SED numerical model results, representing the total bottom deposition resulting from the disposal at sea of dredge materials 21 days after completion of all disposals at the Brown Passage regional disposal site in the Prince Rupert Area. 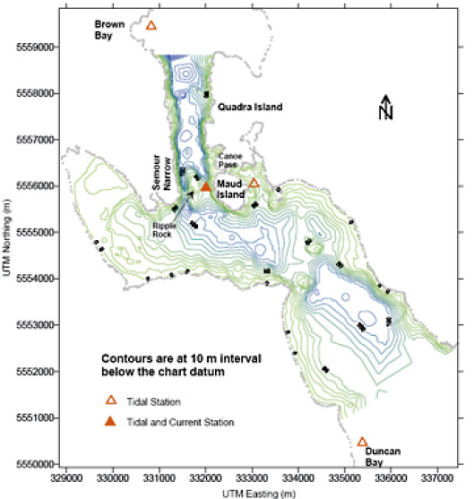 Numerical modeling simulations of ocean currents and water levels have been computed for Canoe Pass between Quadra Island and Maude Island in Discovery Pass, British Columbia, Canada. Canoe Pass has a dam, or barrier, across it which blocks passage of water from the east into Seymour Narrows since the dam was built many decades ago. The numerical model studies are part of a site investigation to assess the potential for operation of an underwater turbine to generate electrical power

The ASL-COCIRM numerical model used in this study is a full three-dimensional circulation model. The 3-D model was used to simulate the water flows and water levels through Canoe Pass if the dam were completely removed and replaced by a 40 m wide passage between Quadra and Maude Islands. 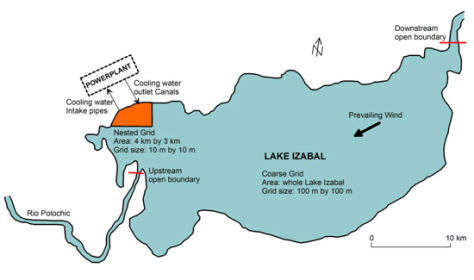 Another recent application of COCIRM-ASL was simulation of the circulation and thermodynamics (Jiang, ea al., 2001) associated with the cooling water discharge of the Burrard Thermal Generating Station in the Port Moody Arm, BC, Canada (Figures 4 and 5). This cooling water into the Arm takes the form of a submerged horizontal heated jet at 6 m below MSL. The model was calibrated and validated using the field data of dye tracing and thermal plume surveys. The nested sub-grid model represented the heated buoyant jet appropriately. The model successfully reproduced the resulting circulation and thermal plume in the Arm.

Port Moody Arm is dominated by tidal processes and has extensive mudflats, which are dry at low tide. The effects of the mud flats were explicitly incorporated into this adaptation of ASL-COCRIM. 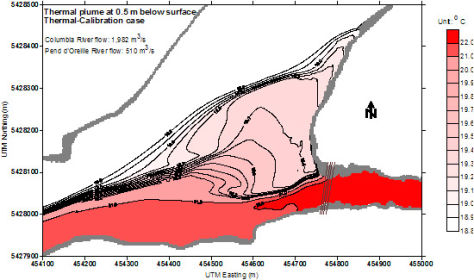 The first version of the ASL River 3-D numerical model was developed and tested for the area of the Columbia River downstream of the Keenleyside Dam. This model was further developed and refined for a modeling application for the Waneta Expansion Project. This modeling study was conducted in the Waneta area at the confluence of the Columbia and Pend d’Oreille rivers. This area had significant morphological and circulation features. The modeling incorporated historical bathymetric and flow data from the mid 1990’s and more recently acquired data sets collected as part of Waneta Expansion Project studies in the summer and fall of 2001.

This case study of a 3-D finite difference numerical model illustrates the overall capability of advanced numerical hydrodynamic models for complex riverine flow applications. The numerical model indicates that the inertial effect and horizontal turbulent diffusion are the dominant physical factors causing the eddies downstream of the Keenleyside Dam.